Carrie and her daughter, Julia, discovered that ovarian cancer can strike at any age
… and that you can fight back!

Little Julia was just a first grader when her unlikely journey began. Energetic, bright, engaged, she began falling asleep in class. Her teacher concluded that she simply was “not paying attention.” 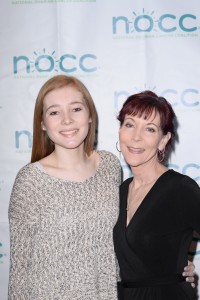 Julia’s mom, Carrie, knew that there was something else happening. It simply was not typical of Julia. After months of making sure that Julia got plenty of sleep every night, ate well, and was physically active … the next clues came.

Julia began complaining of pain in her right side; Carrie’s first thoughts were of appendicitis. “So I took her to the pediatrician. It was not appendicitis,” says Carrie. They ran tests for intestinal problems and modified her diet, but Julia continued to exhibit signs of pain.

Carrie continues Julia’s story: “She had just turned seven, and started developing breasts. I took her back to the pediatrician and said, ‘I know there’s a lot of hormones in chicken, and all the things that we eat, but is this normal?’ My pediatrician said, ‘This does not look normal to me, and I don’t know where to go from here.’ She told me, ‘If I were you, I’d take her to an endocrinologist.’ So I insisted to the insurance company that she needed a CAT scan and MRI.”

Carrie had to press for it, but she was able to get Julia into Yale-New Haven Hospital for diagnosis.

The Yale scans revealed that Julia had a tumor on her right ovary. The doctors thought they could remove the benign growth with laproscopic surgery.

“What we thought was going to be a one-hour laproscopic surgery turned into an eight-hour operation,” recalls Carrie. “They found out that

this was not a childhood benign tumor. It was ovarian cancer. And, not only that, it had metastasized, spreading to the left ovary. Julia had bilateral ovarian cancer.”

She is not the youngest to be diagnosed, but Julia is one of the youngest in America to have ovarian cancer. “Children tend to be more resilient than adults,” says Carrie. “She basically missed second grade, but overcame it.”

At age eleven Julia began hormone therapy to help with natural development stages which don’t occur when ovaries and uterus are removed.

Today, Julia is healthy and thriving … but not done dealing with ovarian cancer. She is helping others.…

Mother, Daughter … and the Battle with Ovarian Cancer

When seven-year-old Julia was told she had cancer, she cried. “But I don’t think that she fully realized what ‘cancer’ meant,” says her mother, Carrie. “She asked me, ‘Will I lose my hair?’ ‘Yes,’ I told her, ‘you probably will.’ She did and was upset about that.” As treatment continued, Carrie was by her daughter’s side for every treatment. She held Julia‘s hand as they took blood. “Every time she was infused with chemotherapy she didn’t have a good reaction, so I would spend the night with her in the hospital. Basically I was pretty much always by her side,” says Carrie. Both mother and daughter are quick to praise the staff at the Connecticut Children’s Medical Center for their excellent care and cheerful spirit.

Today, Julia and Carrie are especially grateful for the work of the NOCC. “You can find support in your community … there’s a network of women who are going through it with you. Organizations like the NOCC make it happen,” says Carrie. 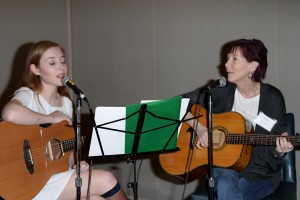 “Connecting with women at the NOCC national conference this past February was a huge gift. Julia finally — for the first time — met other young survivors her age. She had never met anyone who had her kind of cancer, so that was a very good experience for her, really cathartic,” says Carrie.

“Like Julia, I love the NOCC,” says Carrie. “It’s been really incredible to watch my daughter embrace her past because of the NOCC. There were many years when she just didn’t want to talk about it. And then, that all changed a couple of years ago, and now, she is an advocate for it and really is trying to help other women. That is a gift that I hoped would come, but I wasn’t quite sure it ever would,” says Carrie. “I was never going to push her, because it’s her life and her story to tell. It makes me happy that she can be a part of the healing process for others. I really am grateful for the NOCC for providing my daughter a voice.”