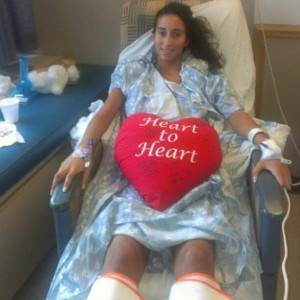 Ashley Steinberg was diagnosed with stage 1C ovarian cancer just after her 24th birthday, in August 2012. She started noticing that her stomach was bloated, felt hard, and would not flatten. She thought that she maybe was just gaining some weight and decided to wait until her annual exam to bring it up to her doctor. Ashley’s doctor let her know that everything felt fine and looked normal. Ashley then explained her symptoms and showed her doctor the bloating of her stomach. She told her doctor that she assumed it was normal weight gain, but her doctor informed her that something else was going on. After this appointment, Ashley got an ultrasound, where doctors saw a mass. They wanted a better view and sent Ashley for an MRI. Later on that day, Ashley received a phone call from her doctor asking her to go in to the office that night with her parents. “At this point, I was freaking out, because something was wrong,” Ashley said. The doctor told her that she had a huge mass covering her right ovary and stomach, and she needed to undergo surgery as soon as possible.

Ashley met her surgeon at the end of that week and scheduled her surgery for the following week. Ashley underwent surgery on September 17, 2012. Her surgeon removed a mass (that was larger than a melon), her right ovary, her right fallopian tube, and tumors on the left side, allowing Ashley to keep her left ovary. Recovery was tough, but she got through it with the support of her family and friends. Pathology results showed that Ashley had ovarian cancer. “I did not know what I was going to wake up to and was very blessed that my cancer was contained,” Ashley said. She did not need to undergo radiation or chemotherapy treatments. Her doctors considered this to be miraculous, considering the size of her tumors.

Ashley’s doctors kept a very close eye on her, with bi-monthly check-ups, exams, and screenings. Unfortunately, in September of 2013, doctors discovered that the cancer returned to Ashley’s left side. She underwent a more intensive surgery, where doctors removed Ashley’s left ovary and fallopian tube, lymph nodes, and her appendix. This cancer was also contained, so Ashley didn’t need any additional treatment. Ashley has not had any subsequent reoccurrences, but she has ongoing symptoms caused by her ovarian cancer, including sickness, depression, and pain. However, she remains positive! She is now two years cancer-free! 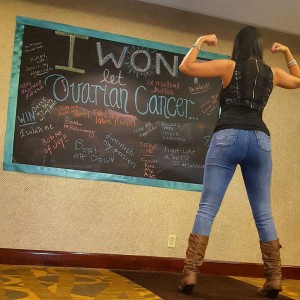 This is the message she wants to share: This cancer doesn’t get diagnosed easily. When it is diagnosed, it is often too late. Also, this cancer most often occurs in older women. I am young and I’ve had this cancer TWICE. My goal is to spread as much awareness as possible to save the lives of other females. I want people to learn how to take care of their bodies and LISTEN to what their body is trying to tell them. I hope that sharing my story, strength, and determination inspires people.

Ashley was featured on a news segment in Philadelphia to spread awareness about ovarian cancer. You can view the segment here: http://www.fox29.com/good-day/84437219-video.