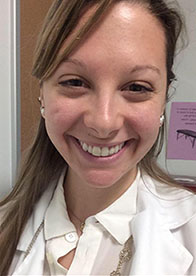 I was seventeen when it all began. It started with bloating and lower-abdominal pain. It was nothing out of the ordinary; I just assumed I was one of those people that had to work out harder. It was always frustrating, but I just assumed it was genetics. I had seen a doctor when it got bad, but she simply said it was normal and some girls have more pain than others with their periods. She gave me painkillers, which I took for a few months, but I wasn’t feeling any relief. My mother convinced me to set up another appointment, she thought it was endometriosis. The doctor told my mom that was not possible, I was too young. My mother pushed a little and insisted that the doctor give me a script for a sonogram.

After my sonogram in March, the technician told me I had a dermoid cyst and because of how large it was it needed to be removed. She was afraid it would affect my fertility down the line and it was strictly for safety reasons. I was told it was a simple surgery and I would be back on my feet after a weekend. I talked to my gynecologist who was surprised to hear I had a cyst; she said from her exam it was undetectable. We set up a date for surgery.

My first surgery took longer than expected and I was very sick after the surgery, as the doctor performed a laparoscopic procedure, where air is pumped into your abdomen. The doctor told my parents that she removed the entire cyst and it looked very normal. The pathology came in a week later and cancerous cells were found. I was referred to an oncologist just to get another opinion after the surgery, and was hopeful that would be the end of it. While I waited for an appointment I celebrated my 18th birthday and went to prom with all of my friends. I decided to live my life; I wasn’t really worried.

My oncologist was wonderful. She took some tests and found that the cyst was growing back at a rapid rate. She discussed all my options and told me that she was going to do everything she could to save my ovaries. She told me she was going to remove the cyst and take the lymph nodes from all parts of my abdominal to check for cancer cells.

The second surgery was a lot easier, but the results were not what I had hoped. She had to take my right ovary out and I had to be treated with four rounds of chemotherapy. I had been diagnosed with stage 3c dysgerminoma ovarian cancer. Since my cancer was so rare and my treatment was so intense, I had to stay in the hospital for a week at a time and I had to have a round of chemotherapy every three weeks. I was devastated. I was too young for this to be happening and too scared of what was going to happen.

Chemotherapy was one of the hardest things I will ever have to do. It’s difficult to write about the experience because it was so hard. I would never wish anything like this on anyone. There were days I woke up and stared at a wall all day because that’s all my body felt like it could do. I was lucky enough to have a very supportive family, and my mother stayed with me through all my treatments. While all of my friends were supportive, many of them were getting ready to go off to college, something I should have been doing.

I was at a great hospital and they took care of me very well. They made me smile on days I didn’t think I would be able to. I lost all my hair and I weighed about 100 pounds, which was rough on my five foot five figure.

I’ve been in remission for almost 7 years now and I couldn’t feel better. I visit my oncologist now only twice a year.

What I hope now is to share my story so others can know how terrible this disease is, and that it’s not just for older women. All women need to listen to their bodies and keep going back to the doctor until you have an answer. I hope my story will help to save the lives of other women.