Not All Cancer Is Pink! – A Conversation With Reality Star Brandi Maxiell 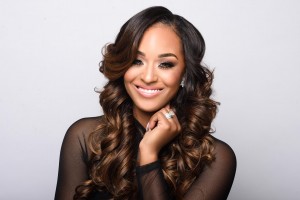 Blessed and beautiful! Brandi Maxiell may be known for her dueling arguments as a reality star on VH1’s “Basketball Wives LA,” but she’s battled a much tougher nemesis and won – that is, ovarian cancer. Today, she’s a wife. A mother. A cancer Survivor.

In 2007, Brandi was planning her wedding to NBA player Jason Maxiell when she was stricken with ovarian cancer in the prime of her life. She was only 24. Thankfully, after months of surgery and treatment, her cancer is now in remission. For Ovarian Cancer Awareness Month, the Dallas native talks candidly about wrestling with cancer, losing her hair and as the Jill Scott song goes: “living her life like it’s golden.”

When did you notice that something was wrong? Did you have any symptoms?
Back in 2007, I had all the classic symptoms of ovarian cancer – back pain, bloating, weight gain, abdominal pain, feeling full quickly after eating a couple of bites of food as well as the need to urinate urgently or often. Initially, I thought the weight gain was due to my love of soul food, since I’m a Texan. I knew I wasn’t pregnant. Really, the big tell-tale sign for me that something was wrong was the hard knots I could feel in my abdomen area.

Do you have a family history of ovarian cancer?
No, I don’t. My family is fairly healthy. And because of my family history, my symptoms were initally dismissed by the doctor. Instead, he gave me medicine for back pain because I was this young, Black woman in my twenties with no family history of any major disease. Ovarian cancer really is “a silent killer” because the symptoms are so general, any woman could have them during a menstrual period. After my surgery, my doctors told me that I had one of the worst cases of ovarian cancer they had seen.

How did you take the news that you had “the C word?”
When I went for a second opinion, I was sent to a specialist – an oncologist. He was blunt: “You have cancer,” he said. “We’ve got to get it or you’re going to die.” Period. I was 24. I didn’t see it as a death sentence, instead I took the news with a certain resiliency. I was determined to live the best life possible. I was attending the basketball games of my then fiancé, Jason Maxiell, and doing things with my friends and family, like attending an R. Kelly concert. I wasn’t going to let cancer stop me from living.

There are several pictures of you on the Internet, showing your hair loss during chemotherapy. How did you feel about losing your hair after various rounds of chemo?
I was prepared to go bald because my doctors informed me that I would lose my hair after 14 days of chemo. And sure enough, on the thirteenth day, my scalp started tingling and my hair began shedding. Interestingly, I was in the mirror of a women’s bathroom during a Detroit Pistons basketball game when this transistion began to occur. By the seventeeth day, I was completely bald. To be honest, I wished I’d taken more picture of me with a bald head, because it’s a reminder to me that I’m a Survivor.

How did your then fiancé Jason Maxiell support you in your fight against cancer?
My then fiancé was a big support system for me. I was cheering for him in the stands, but he was cheering for me on and off the court! When I went bald, he shaved his hair as a sign of solidarity and to bring awareness to ovarian cancer on the basketball court. It was such a thoughtful gesture of love. After all, ovarian cancer doesn’t just affect one person, it affects the whole family.

What advice would you give other women about their health?
I’m sharing my story because I want women to listen to their body. Know your body. You live with it. You sleep with it. You know if there’s something wrong. Listen to that inner voice. If a doctor dismisses your symptoms because you don’t “look like the typical person that might have ovarian cancer,” find one who’ll listen.

What can we expect from the next season of “Basketball Wives LA?”
Are you kidding me?! More drama! Don’t worry, though … figuratively speaking, I have a lot of fight in me! After all, I beat cancer and won!

One thought on “Not All Cancer Is Pink! – A Conversation With Reality Star Brandi Maxiell”