Daughter: “Hopefully, by telling my mother’s story, it will inspire others…” 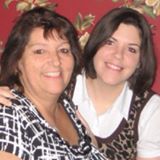 Jennifer and her mother, Susan.

My mother, Susan, passed away at 55 from Stage 3 ovarian cancer, but in no way did the cancer define who she was. My mom was an incredible woman, daughter, friend, sister, wife, cousin, mother, and grandmother. No matter what corner of the Earth she would travel to, she would always run into someone she knew and greet them with a hug and smile. A party did not officially begin until she walked into the room. Her smile was infectious; you couldn’t help but to be happy when you saw her. My mother was a giving woman. She never took for herself without giving to others first. She always knew exactly what to say and when to say it.

Don’t get me wrong, Susan was a proud New York woman! When she meant business, you knew it! My mother would tell it like it is, whether you wanted to hear it or not. She was genuine in her words and actions. She inspired those around her to be better people, to laugh heartier, to give more, smile often and never give up. She was truly the best mother you could ask for. I pray that I will be half of the woman that she was.

They call ovarian cancer the “silent killer,” because once you experience a symptom, it’s likely too late to help. My mother had her first symptom at the end of April 2014. She was diagnosed in May and passed away July 25th, 2014. That’s how fast it took her. When she was first diagnosed, she was in shock. She told me that she made her annual exams a priority and never missed a screening. The doctors informed us that unless there is history of ovarian cancer in your family, doctors will not check your ovaries. Imagine if that screening lasted five more minutes, and they checked one more thing….She would be with us today.

It makes me sick to my stomach to think that this could have been found and treated long before. I could scream, I could be angry at the doctors and the world for what happened to my mother, but that is not what my mother would have done. She would tell me, “It is what it is”, brush my tears aside and say, “So, now what?”

So now, I am wiping away my tears and I am going to live for her. I will do what I can to inform people about the importance of being your own health advocate. Hopefully, by telling my mother’s story, it will inspire others to have themselves checked before it is too late. Maybe it will inspire them to enjoy their life like she had. Maybe it will save someone’s life.