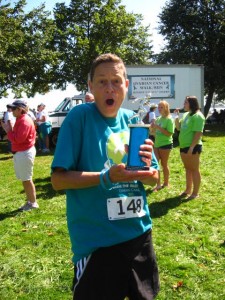 How old were you when you were first diagnosed? How was your cancer found?
I was 43 years old. In May of 2009, I decided to have a hysterectomy because I had fibroids that caused annoying symptoms. During the operation, my doctor found a cyst on one of my ovaries that did not look like, or behave like, a normal cyst, so she decided to remove the ovary. Ten days later, at my follow-up appointment, she told me it was cancer.

What was your treatment plan? How did you tolerate the treatments?
My doctor connected me with a surgical oncologist, who discussed what he felt was the best treatment plan, which included surgery to remove the other ovary, remove the omentum, and dissect lymph nodes. I underwent surgery at the end of June in 2009. Only one lymph node out of fifteen came back positive for cancer.

I then had an IP port surgically placed and received six cycles of chemo, each cycle consisting of one day of IV chemo with Carboplatin and Taxol, one day of IP chemo with Cisplatin, and, a week later, one day of IP Taxol. The IV chemo was the easiest part. The IP treatments were pretty brutal. The chemo was delivered through the port, directly into my abdomen. I felt like a rotisserie chicken, as every twenty minutes, my nurse would rotate me so the chemo would wash through each side.

I can’t describe how it made me feel physically and emotionally; it was really tough. I’m still processing the whole experience with my therapist. This particular treatment was brutal for two reasons: 1) the chemo made me so bone tired that I could not walk a block (I am a runner and an avid walker, so this was no picnic!) and 2) eating and drinking was incredibly challenging. Every day was an adventure.

I remember sitting out on my back porch and staring into nothing, trying hard not to think about this reality. The day before each chemo treatment was always tough, because I knew the intense, sick feeling would start all over again.

I’m so grateful and blessed to say I have not had a recurrence. But one thing I will say, it’s so hard not to have that fear, that terror, take up space in my brain and push it’s way to the surface at least a few times a week. When I hear of other friends whose cancer has returned, or a new diagnosis, I think, how have I managed to not have a recurrence? I try not to focus on that, but it’s there.

I have friends who have died, some younger than me, from ovarian and other cancers, and survivor guilt is something I deal with.

Who has helped/supported you throughout your cancer journey? 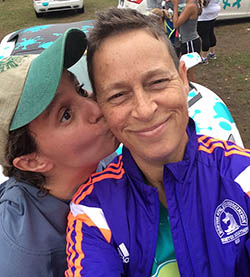 My spouse, Meg, has been my main support through this. She is the one who was with me during my surgeries, waiting for the doctor to come out and say it’s over, with me through each chemo treatment, and now, with me as I deal with menopause. I’m going on six plus years of hot flashes and mood swings, and now osteoporosis. Meg is a real trooper and always loves me through it all.

My Mom is also a great support. She was diagnosed with breast cancer the year after I finished treatment. It was really triggering going with her to the same chemo infusion center. I wanted her to have my nurse, and she got great care, but it was so hard to witness. Now we both have things we deal with post-cancer that are always with us. We lean on one another. She is cancer-free now, thankfully, too. 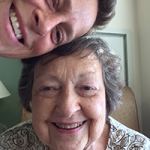 My friends and fellow Clown Care Unit colleagues are all awesome. They helped us during my treatment, keeping me company on long days, bringing me comfort food, and just knowing how to distract me when I was feeling down.

How are you involved with the NOCC?
In 2010, my friend, Patty, died from ovarian cancer. She was younger than me and had been dealing with the disease longer. Her Mom also died from ovarian cancer and her family deals with the BRCA gene. I wanted to honor her life, and friendship, as she was so generous to me while I was just finishing treatment, while she was dealing with her own cancer. So, I started Team Patty for the NOCC 5k. I’ve been doing it ever since. I run and raise money each year, as well as participate in Massachusetts Chapter events, meetings, and programs. It’s a special community to be amongst others who have experienced the isolation and fears that ovarian cancer brings.

Do you find support through online ovarian cancer communities?
Everyone’s journey, experiences, and feelings around cancer are different, but it does all make us feel isolated and alone. Now that there are more and more online communities, it takes away some of that isolation. So, even if you feel sick and exhausted from treatment, or emotionally drained from the PTSD, there are so many who understand those feelings, that you can feel community online. It really helps to hear about others’ experiences and provide support in some way. Someone always has an idea, a suggestion, or a resource for any question or concern that someone posts. Sometimes it feels reassuring just seeing all the responses to one post. It’s proof that no one needs to feel alone going through this. 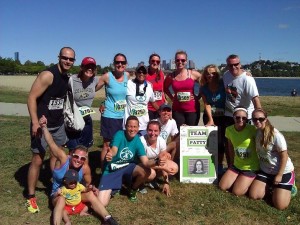