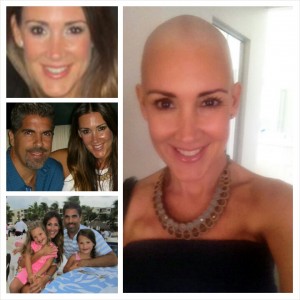 Ivanna and her family.

I have to say that being diagnosed with Stage 3A Ovarian Cancer this past August was a shock. It wasn’t that I thought I would be immune to Cancer, I just never thought it would be ovarian.

Due to a strong family history of Breast Cancer in my family (great-grandmother, mother and aunt), I was tested for the BRCA gene in July 2013 and wasn’t surprised when my results were positive for the BRCA2 mutation. I immediately decided on a prophylactic double mastectomy without any hesitation. Both my mother and her sister were diagnosed with Breast Cancer in their 30’s and I remember as a 12-year old how hard it was for them as young parents, and for us as children to deal with not just the diagnosis, but also the harsh effects of chemotherapy (my mother had a recurrence almost 30 years later, and she is in great health. Sadly, my aunt lost her 7-year battle at 42). As a mother of 4-year old twin girls (at the time of my decision to undergo the prophylactic double mastectomy), I knew that I was making the right decision, and went ahead with that surgery in November 2013. It wasn’t easy with 4 surgeries within 5 months, but everything ultimately turned out great, and my risk of breast cancer is now virtually zero.

Parallel to meeting with breast surgeons, I also met with a gynecological oncologist to decide what to do with my ovaries, and also had a second opinion. I was to be closely monitored for Ovarian Cancer with a CA125, Vaginal Ultrasound and a Pelvic Exam every 6 months. Both doctors said that my ovaries did need to be removed before I was 45, but it didn’t have to be now. I was thrilled to hear that news, and the surveillance began.

In the January 2014 ovarian surveillance, everything came back normal, but in July 2014 everything had changed even though I really didn’t have any symptoms. Still my doctors thought that it was probably nothing, but since I was BRCA+ we would move ahead with the BSO/Hysterectomy. I woke up to find that it was indeed ovarian cancer, but the surgery went very well. The surgeon was confident, the odds were on my side, and everything came out intact, so I wasn’t that concerned, and I assumed it would be an early stage. Unfortunately, it was a very aggressive tumor and that wasn’t the case. Thankfully my prognosis is great and I have an amazing support system.

This however is not the full story. While this diagnosis can be very scary, there is a dimension to this experience than has been and continues to be of growth, learning and perspective. This has not just been the case for me but also for the people closest to me.

The choice emerges to see the glass half full instead of half empty, having made that choice and being thankful for what I have really makes this experience just what it is – an experience. I am not saying it’s without difficulties, as the treatment is very aggressive and grueling. I’m tired, in pain, can’t eat or sleep, almost 15 days of my 21 day chemo cycle, but the days that I’m not like that, I make the best of it. I live the now, enjoy today, and try not to put too much emphasis on tomorrow. It’s a personal choice, one that I can control and that is empowering.

I tried so hard to avoid going through something like this, and all the doctors have said that I did everything right. But I still got it, and my family and I still have to experience this. So, we’ll make the best of it, we’ll learn and come together from this, and we are.

This has inspired me to spread the word about this disease in my community:
http://www.wsvn.com/story/26639899/catching-cancer
http://www.miamiherald.com/living/health-fitness/article2309095.html
http://www.sun-sentinel.com/elsentinel/fl-es-cancer-ovario-20141010-story.html#page=1

One of the survivors in the NOCC video says at the end, “It’s not about waiting for the storm to pass. It’s about learning to dance in the rain.” Thank you! I absolutely love this, and this had made a huge impact on me early on, and that is what I’m trying to do and live by.