Why We Rally for Riley 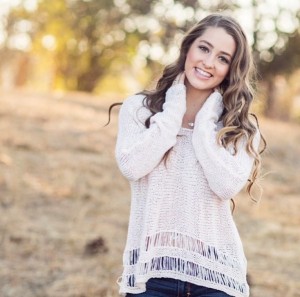 This is Riley Benado. She graduated from Paso Robles High School in California just last year, serving as the school’s varsity cheerleading captain. She seems like any other teenager, writing that she loves “wakeboarding, taking pictures, writing poetry, and listening to [her] favorite singer, Taylor Swift.” But there’s something about Riley that she doesn’t share with her peers: she is an ovarian cancer Survivor.

In September of last year, Riley was experiencing severe bloating and pelvic pain. She describes the bloating, saying it looked like she was 5 months pregnant. She went to a gynecologist, who gave her a pregnancy test, which was negative. The doctors also performed an ultrasound to see if there was anything that looked abnormal. The ultrasound showed extra fluid in Riley’s stomach, but the doctors couldn’t get a good look at her organs. Her doctors then decided to perform a CT scan. Riley’s gynecologist requested that she return to the office as soon as she received the results from the scan. Riley was told that there was a 98% chance that she would be diagnosed with ovarian cancer.

Riley was told that she had a mass on one of her ovaries that was 11 by 13 cm. It was so large that it was affecting both sides of her body. She also had extra fluid in her stomach and enlarged lymph nodes, which are all signs of ovarian cancer. 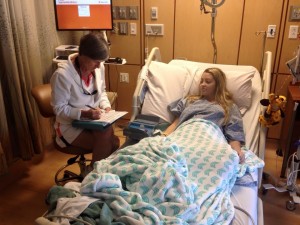 On September 23, 2015, Riley was officially diagnosed with Stage 3 ovarian cancer.

Though her doctors planned on performing a full hysterectomy, they were able to save one of Riley’s ovaries and her uterus. Prior to the surgery, Riley said that “removal of these parts of my body is not only scary, but it’s heartbreaking. I have always dreamed of having my own children and raising a family.” Her family is thrilled that her ability to have children has been preserved. Riley has continued to update supporters about her journey on her blog, “How Teal Became My Favorite Color.” 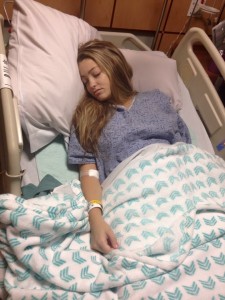 Riley hopes to continue to share her story and spread awareness about ovarian cancer. She writes, “Because this is so rare for someone at such a young age, I hope that others can become aware of ovarian cancer after reading about my story. I hope my journey inspires others and helps anyone going through similar challenges to understand that they, too, can overcome a difficult battle.”

Riley’s story has been shared on social media sites using #RallyForRiley. The support has been tremendous! To follow Riley’s story, you can read her blog posts here: rallyforriley.me. If you would like to support Riley’s family, you can visit her GoFundMe page here: gofundme.com/rallyforriley.