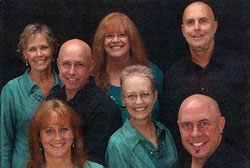 Our sister, Bonnie, the oldest of seven children, and the rock of our family, was diagnosed with ovarian cancer in February 2010, two months after we lost our dad to lung cancer.

She was under the care of a homeopathic doctor who misdiagnosed her symptoms as gastrointestinal issues. In October 2009, Bonnie requested to have an MRI performed to check for cancer. The doctor told her “there is no need at this time”. In February 2010, she was rushed to a local hospital in extreme abdominal pain. It was there that a CAT Scan was performed. The hospital then informed Bonnie that she had cancer and needed to go home and call her doctor. The news was not only devastating but also initially infuriated our family with the way the message was delivered. Unfortunately, the news was received on a Friday evening of a holiday weekend.

This ended up to be a blessing because Bonnie was rushed to Hartford Hospital the following day and was placed in the cancer ward; the place she needed to be. She was diagnosed with Stage 4 fallopian tube cancer, a form of ovarian cancer. She had surgery to remove a cancerous tumor the size of a football, as well as numerous other tumors on other organs that were affected by the cancer. Bonnie received her treatments from the Helen & Harry Gray Cancer Center for quite a while.

Whether she was undergoing chemo treatments or having blood drawn, she would always bring in homemade baked goods. That was her way of thanking those who cared for her. Bonnie loved to bake and nothing would stop her from doing what she loved.

Finally, the doctors at Helen & Harry Gray told Bonnie the treatments they were giving her were no longer working. She was a wife, mother of four, and her proudest role, a Grandma to six, two of whom she and her husband adopted the year before she was diagnosed. She was not ready to give up so she decided to go for treatments at the Dana Farber Cancer Institute in Boston.

Her treatments in Boston were twice a week. Between her daughters and her siblings, we got her up to Boston for every treatment. But more often than not, she could not have her treatments because her blood counts were too low. After a very short time, the doctors at Dana Farber informed her that they could no longer do anything for her, as their treatments were not working either. Bonnie resigned herself to the inevitable and decided to make the best of the time she had left.

We went to see her as soon as she got the news. She was lying on the couch and our mom was rubbing her feet. We went over to her and started crying. Her response to us was, “It is going to be ok. It is just going to be a little quicker than we thought.”

She was a woman of strong faith. Her strength was amazing. She helped us through her hard times. She would wipe away our tears. Her famous saying was “Keep an Attitude of Gratitude”. She even had cancer bracelets made with that saying.

Upon investigating this horrible disease, two of us sisters decided to have elective hysterectomies. The other sister ended up being diagnosed with uterine cancer and had to have a hysterectomy.

Bonnie passed away on November 29, 2011, one month after living out her dream of taking her grandchildren to Disney World. She was an inspiration to all who knew her and even to strangers that she encountered along her courageous journey. We are certainly grateful to have had Bonnie in our lives. We miss her so very much; we feel her strength every day.