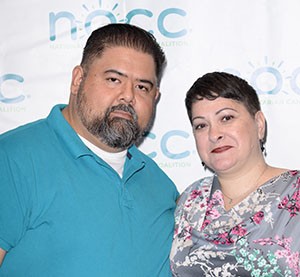 Tina felt something wasn’t right two years before she was diagnosed with ovarian cancer. Doctors told her that she either had IBS or she was a hypochondriac. Tina would go to the gym, but felt bloated and uncomfortable. One day, she woke up to a very heavy period, and she knew something was wrong. Her blood pressure lowered, she was very pale, and felt faint. She called her OB/GYN and was sent to the hospital to have an ultrasound.

The doctors found two masses, one on Tina’s right ovary and one on her left ovary. She had surgery two days later. Tina says, “The doctor asked if I wanted to have more children and I said yes. So he said he’d do the best he could do save one ovary or both, to see if I could conceive another child. When he came back and I was awake from the surgery, he said he removed both masses, one ovary, and half of the other. ”

Tina remembers the conversation she had with Manny when she was diagnosed. She says, “At that time, he wasn’t my husband; he was my boyfriend. I said to him, ‘you can leave now,’ and he said, ‘I’m not going anywhere.'”

Tina had her second surgery with a new doctor, who removed some lymph nodes. She was staged at 3C. The doctors tried to freeze Tina’s eggs, but she wasn’t producing any at the time.

Tina’s third surgery, just two weeks after the second surgery, was a radical hysterectomy. Manny proposed while Tina was in the hospital. He says, “We were having issues with the hospital staff and nurses saying I could only visit at certain times, because we weren’t technically family. It made it difficult to deal with the paperwork. When we got married, it was more of a necessity.”

Tina and Manny got married a month after Tina’s third surgery. Two days later, Tina started chemotherapy. She had chemo treatments once a month for six months. Tina had a terrible allergic reaction to the chemotherapy. She blew up like a balloon, experienced cardiac arrest, lost her sight, and at one point was paralyzed from the waist down. After the third round of chemotherapy and horrific side effects, Tina decided to stop treatment. She was told that she might only survive 6-8 months. Tina says, “I was okay with that. Not that I gave up fighting, but I was happy in my life and all that I accomplished. I said, let me just spend the rest of this time with my family. And that was 14 years ago.”

Tina first found the NOCC a year after she was diagnosed. She was looking for a way to get involved and spread awareness about ovarian cancer. Tina is now an enthusiastic, committed volunteer. She attends health fairs, conventions, and other speaking engagements on NOCC’s behalf. She says, “I think a lot of women tend to be scared, or don’t have knowledge to talk to their doctor about women’s situations. I help them to be confident and ask questions. I also tell them that ovarian cancer does not discriminate. There’s a perception that it only happens in older women, and that’s not the case. With the NOCC, we’re stronger together.” 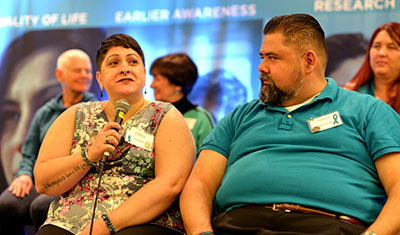 Tina wants to tell other women with ovarian cancer to do whatever they need to do. She says, “As women, we feel that we need to be strong for our family. I try to comfort women and tell them it’s okay to not be strong, to ask for help, to cry and melt down. You have a right to do that.”

Manny’s advice for caregivers is: don’t forget to take care of yourself. He says, “Don’t suppress everything so you can get through the day. There comes a point when you can’t hold all of it back. Try to find a balance where you’re taking care of yourself in addition to your loved one.”

Thank you, Tina and Manny, for sharing your story. We appreciate your dedication to spreading awareness about ovarian cancer!